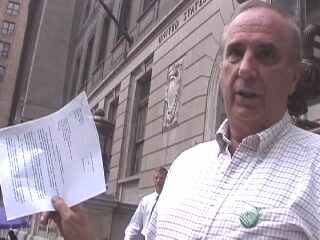 Bill Barry, the Green Party candidate for Baltimore City Council in the 3rd District is announcing a Taxpayer’s lawsuit filed with the Baltimore City Circuit Court on Wednesday, September 29, 2004. The suit attempts to block payments by The Board of Estimates of legal fees for City Council members being investigated by the federal prosecutor for possible corruption.

The suit, which Barry is filing as a private citizen and taxpayer, demands that the Board of Estimates:

The issue of a legal defense for City Council members arose in 2003 when U.S. Attorney Thomas DiBaggio issued subpoenas to all 19 City Council members, asking for “all documents” over the previous five years concerning their financial, political and professional dealings.

These subpoenas were based, in part, on articles in The Baltimore Sun in 2003, which described Council members’ hiring of relatives and accepting free parking passes, and other gifts from corporations doing business with the city.

Barry stated: “I believe that the Council has no legal right to use public monies to hire private attorneys for such an investigation. Taking alleged freebies and favors is not part of a Council person’s official job duties, so the Council members should hire—and pay for—their own lawyers. We expect that the Circuit Court will agree and will order the repayment of all money spent on private lawyers.

“Beyond the legality, we as taxpayers need to look at how the City Council spends our money. Unfortunately, the Council members have been unchallenged for so long that they feel my tax money belongs to them. A recent newspaper article described many public schools without school nurses, putting our children at risk. How many school nurses could we maintain with $ 230,000.00? It is clear that the Council has backward priorities—putting themselves before the health and safety of our school children.”

Barry pointed out a similar situation involving former Indiana University basketball coach, Bobby Knight. Knight was sued for shoving a former assistant coach and settled recently out of court. Knight then tried to get the University of Indiana to cover his legal expenses but the university administration refused, claiming that the incident did not fall within the scope of Knight’s official responsibilities.

“Unless the alleged hiring of family members and taking freebies from city contractors is part of the official duties of a Baltimore City Council member,” Barry concluded, “there is no basis to expect the taxpayers to pick up the tab. Let Bobby Knight be a lesson.”

Since Barry is filing this lawsuit as a citizen and taxpayer, he said that the legal action will continue, no matter the results of the November 2nd election.

“As a candidate, however, I feel strongly that City Council needs to abide by ethical principles for a change.”